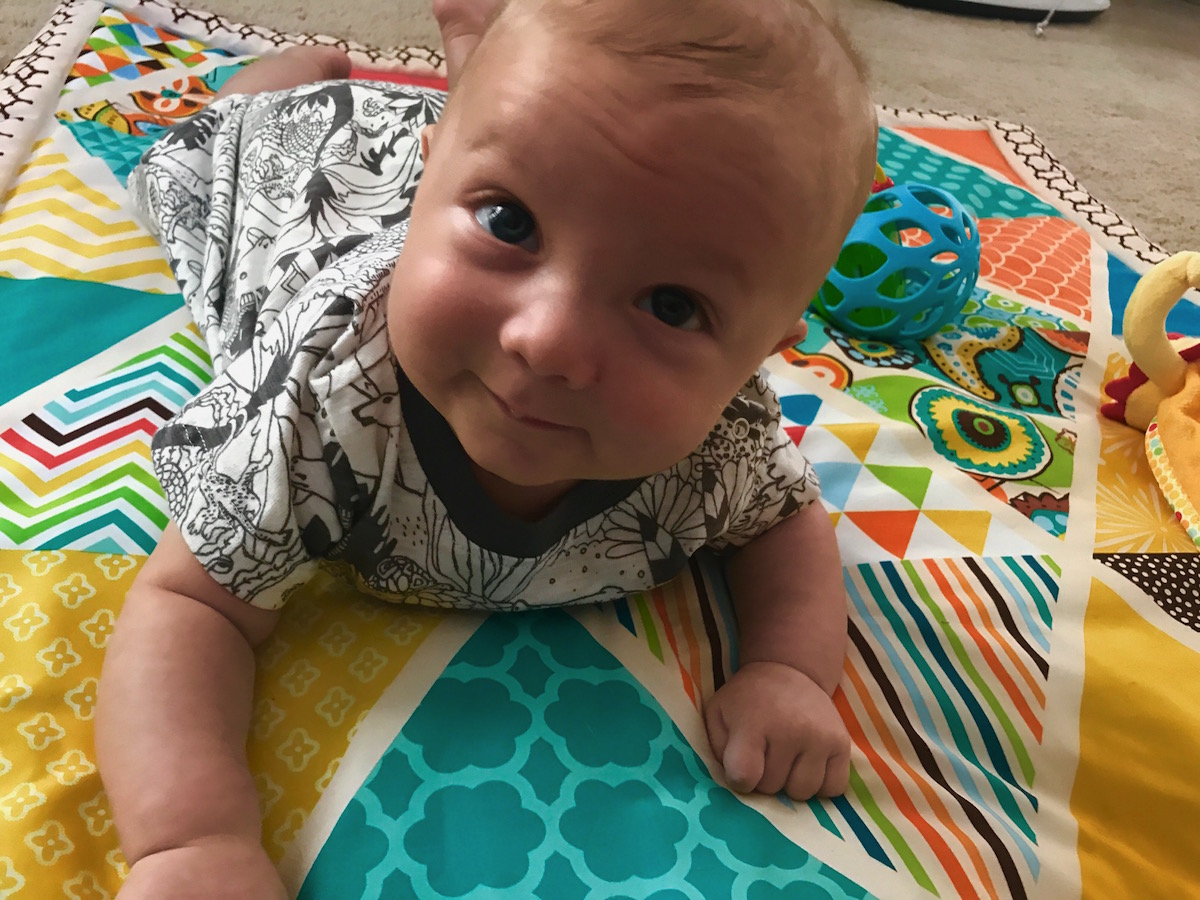 Right now, Jude is in pain on and off. His gums are swollen. He fusses. He pulls on his mouth and has a low grade fever, and struggles with sleep sometimes. It’s the first time there’s been an obstacle that I can’t fix by cuddling him or feeding him or changing a diaper, and it’s a terrible feeling. It seemed pretty obvious to us that he was starting to teethe. People were quick to jump in. “He’s too young.” “I highly doubt it’s that.” “He probably just needs sleep.” “Maybe it’s his ears.”

So I talked to the pediatrician’s office today, and sure enough, he’s got all the signs of pre-teething, which is totally normal and can last up to a couple months. But you know what? Some baby Tylenol and some teething toys are helping, and we’ll ride it out just fine. (Aside: The mesh feeder with an ice cube in it is great. A little wet, but easy for him to grab and stays colder than the wash cloth.) Short story: I know my baby. I should trust myself.

Jude is 3 months old now. It’s obviously a very pivotal time developmentally, and he is so much more aware of the world than he was even a couple weeks ago. He is talking constantly and smiling and moving around and interacting. It is so much fun, but we’re starting to think ahead. How do we want to do sleep? When does he need to go to the crib? First foods? I have to go back to the office a couple days a week – how do I pump enough to keep my supply up? What does that schedule look like?

I’ve learned from my experienced mom friends and mentors that what’s “best” changes all the time. The suggestions I get from people who raised kids 20-30 years ago are so different than what we hear today. Some things that seemed like no brainers for my mother’s generation (or even a little younger) are things that we would never imagine doing now. We know better so we do better, right? Older mamas, we aren’t being disrespectful when we do things differently. So much of your advice is wonderful, but sometimes the rules change. For example, more than one person has told me to put rice cereal in the baby’s bottle to help him sleep longer. This is why we haven’t done that. We know he’s not ready for anything but breast milk yet, and when he is we’ll experiment.

In the 50s and 60s, formula became incredibly popular. By the early 70s, 75% of babies in America were formula fed. Now, those numbers have basically flipped – 75% of newborns are breast fed, because now we know that scientists can’t beat biology. The information changed, so we changed. So when is “conventional wisdom” is no longer wise?

So I’ve talked to the pediatrician. I’ve met with lactation consultants. I have asked friends for advice. I read more on the internet than I probably should have. I even made the mistake of starting to read some parenting books for tips. Some of you told me not to. I went into them thinking I’d take what they had to say with a grain of salt. I should have listened to you.

Right now, my biggest stressor is sleep. Oddly enough, it isn’t because we aren’t getting any – we’re all actually pretty well rested. However, I know that his sleep needs are changing as he is more aware and won’t be able to spend 3 hours napping on me every afternoon. It’s unbelievable how many theories and methods there are out there, and each method claims to be the only/best way to get your baby the exact 16.37 hours of sleep he needs every day and if your kid acts up it’s definitely because you’re a terrible mother and are depriving your child of the proper amount of sleep. Also they should sleep in our room for a year. But NEVER in bed with you because SIDS, even though a lot of lactation consultants and breast-feeding experts are now recommending it because it keeps them fed and it’s also really not safe to pass out on the couch while feeding your baby at 3am. But I digress.

HOW DO YOU KNOW WHAT IS RIGHT?!

This week, we started a night time routine. Bath, nursing, bed. Simple enough, right? But then I remembered something I read about how I shouldn’t nurse right before he goes to sleep because he’ll never learn how to self-soothe. So we tried to read a story, and then I put him down drowsy. It was a mess.

I sat there in tears while he screamed, reading a book that was telling me that my 8pm bed time was too late and thinking about my perfect friends that have their perfect babies on perfect schedules at 6 weeks old. He was miserable. I felt like a failure.

I quit worrying about whether I was spoiling him. I quit listening to voices telling me I’m holding him too much. He’s little. When he cries, he needs something. So I nursed him and snuggled him until he fell asleep, and he slept for 12 hours. I’m the one who stayed up until 1am because I was stressed out.

So, I’m done. I’m done playing the comparison game. I’m done pretending that every book someone recommends has some invaluable wisdom to impart. I’m done obsessing over what I “should” and “shouldn’t” be doing. My baby is 3 months old. He is happy and healthy and rested. We will figure out the other stuff when he tells us it’s time.

I’m unsure why I felt the need to jump into this rabbit hole in the first place when we’re all happy and sleeping. I’m also sort of unsure why I decided to write this all down except to say this:

Mamas, you know your babies. You know your family. What works for someone else might not work for you and that is totally okay. If your kids are thriving and you are thriving, then stop second guessing yourself and do what works.