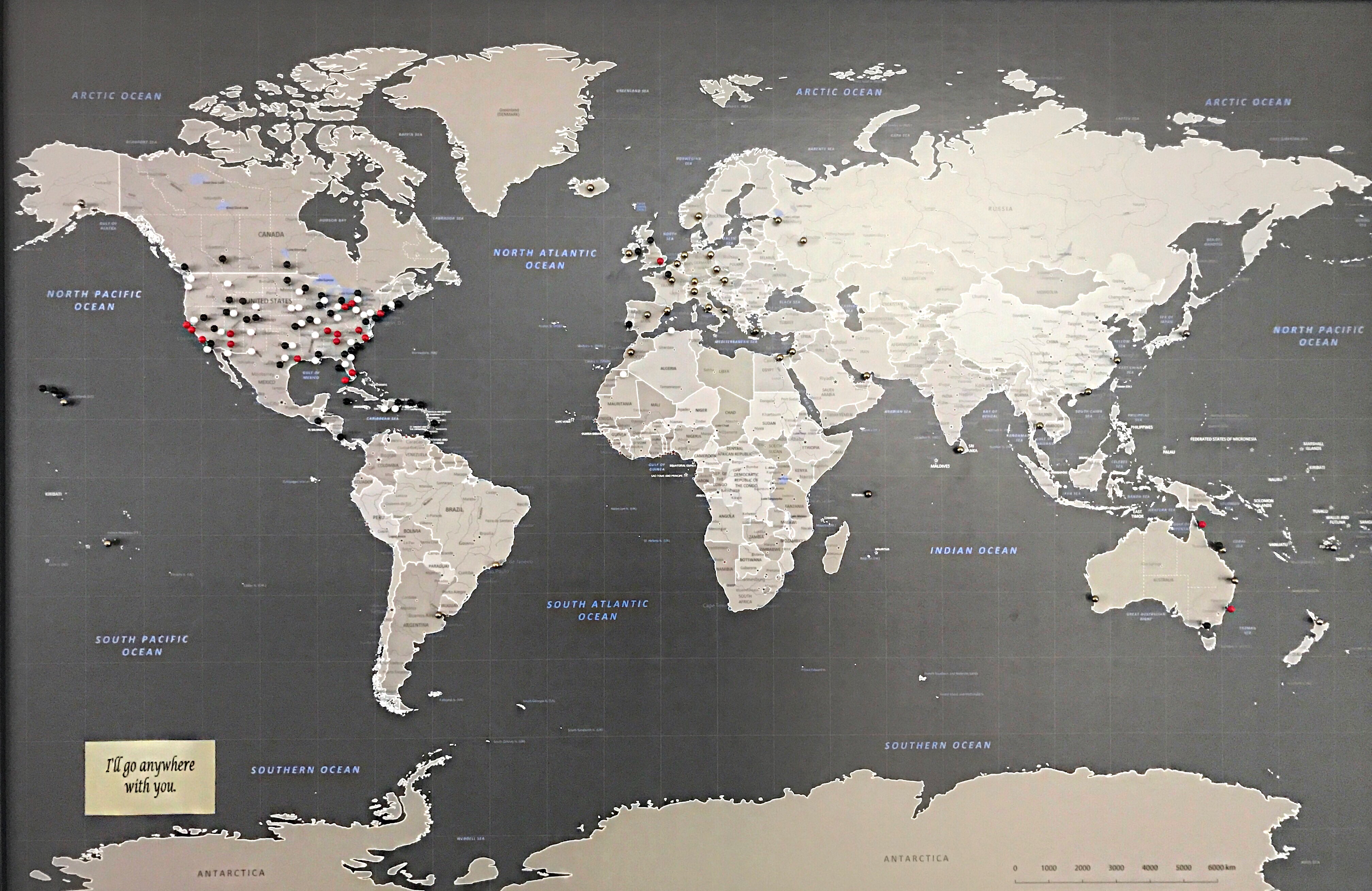 This was actually an assignment for the class I’m taking. I thought it might be worth sharing.

Our first date came packed between his arrival in Atlanta and my departure; a brunch I enjoyed so much that I decided to postpone my cross-country journey until the next day. He picked me up from where my car had been dropped off for a last-minute oil change, a sunflower waiting for me in the passenger seat. “You seem like a sunflower girl,” he had said.

He came to say goodbye, loading my car with two months’ worth of luggage and cleaning out the refrigerator while I scrambled to get out the door. Two months in Los Angeles. I was excited for a cross country road trip. I was excited to live on the west coast for a while. I was not, however, excited to leave him.

Seven days of phone calls and texts and pictures later, I was in Los Angeles. As I arrived, crawling across the valley on the 10 at about 9 miles per hour, I called him to let him know that I had arrived. Something in me knew he would be visiting before he even said it.

“I don’t want to wait two months to take you out again…” And he didn’t. Two weeks later, I was picking him up from LAX, picnicking on the beach in Santa Monica after a late-night arrival. He barely felt like someone I’d just met.

Our second date came the following night. We had tickets see Ed Sheeran, who I was only vaguely familiar with at the time. I loaded a couple bottles of wine into my oversized purse and we took an Uber up to the Hollywood Bowl, arriving early due to our grossly over-estimated time in Los Angeles traffic. A two night, sold-out engagement ensured a mass of humanity everywhere we turned. We fought our way through lines for drinks, bathrooms, and snacks before we landed in a gift shop to kill a little more time.

It was at that point I remembered that I hadn’t brought a cork screw to break into my carefully selected bottles of wine. He braved the line and spent $27 on a small stainless steel corkscrew with “Hollywood Bowl” engraved on the back. The wine started flowing before the opening band even took the stage.

By the time Ed was 20 minutes into his set, I was overwhelmed. The Hollywood Bowl overlooks the hills, the iconic Hollywood sign to the right of the stage. It is beautiful on a bad day, but in that moment it was stunning. I was so engrossed in the solo performer on the stage, building his sound layer by layer, flawlessly executing the fullest sound I have ever heard one person create. I collapsed onto the steps, completely mesmerized. When I finally glanced to my right, my date was staring at me. “I spent more time watching you than the stage,” he told me later.

Two years, several states and a few countries later, we now have overpriced corkscrews from all over the world. Buckingham Palace. Sydney Opera House. Madison Square Garden. The Great Barrier Reef. The Golden Gate Bridge. The Grand Canyon. Stonehenge. They reside in the top drawer of the bar in our dining room, thrown in with shot glasses, beer cozies, and other things that we rarely use but like to cling to. Above the bar is an illustrated version of our history; dozens of travel photos in frames, a map with a bucket list marked by gold pins, red ones checking off where we’ve already been.

It’s amazing the memories that we attach to silly pieces of metal. Going through that drawer always results in the two of us regaling whoever we’ve trapped in our house with stories. Remember that time I snorkeled the Great Barrier Reef while five months pregnant? When I got violently ill in London, then rallied to walk the Tower of London and see Wicked because it was his birthday? We didn’t cross an ocean to stay in a hotel room!

The one with the mountains on it was from Flagstaff. Remember that time we drove two hours through a storm so I could take pictures of a snow covered Grand Canyon, only to realize that it was completely inaccessible and we could see nothing but white from every vantage point? He vowed to never let me talk him into chasing a blizzard again, even if the pictures would be really pretty.

Key West. The one with the ugly rooster on it. That time they warned us about 4-5 foot waves, but he couldn’t control himself and took the jetski in circles until he flew off it, skipping 50 feet across the water. Before we could even get our bearings they offered us a free parasailing excursion and we were in the sky, our phones hanging from our neck in water-tight bags as we snapped pictures of our feet dangling 600 feet above the waves.

Silly overpriced trinkets, yes. The stories attached to them, though, are priceless.